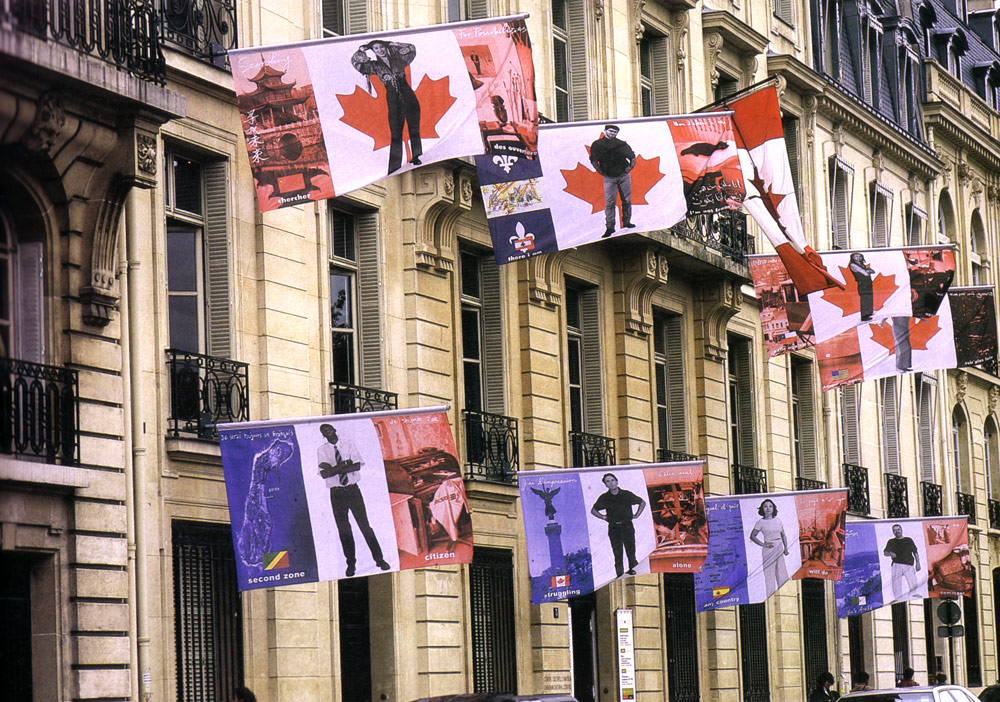 Flags art a common element of the urban visual landscape. Traditional signs of collective rallying, they identify a nation, a region, a city, etc. Wavering Identities appropriates these symbolic objects and diverts their purpose. Instead of a national entity, each flag designates an individual who has been marked by many countries and cities. These flags were created in collaboration with people who have all left their native lands to come live in France or Canada.

The general composition and colours are those of the flags of Québec, Canada and France. Each flag is divide into three parts. The left side evokes origins, a portrait occupies the center, and the right side offers a partial view of a place of residence. Phrases and words in many languages express the feeling of each participant.

Wavering Identities is more an event than an exhibition. The project turns the symbolism of the flag around to rethink the relationship between public image and personal identity. Wavering Identities plays on inter-nationality by dealing with the notions of cultural enrichment but also rejection, solitude, territory, prejudice and racism. According to where Wavering Identities ’ “flags” are raised, they provoke a range of reactions: surprises, rejections and reflections related to the particular places they both solemnly and light-heartedly invade.

Certain events demand those subjected to them to take a position of total resistance against something. The meaning of resistance gives meaning to life. War is an event without meaning and the place of writing is a space to respond to death with death, with words, rage and anger. Only cats understand this dichotomy. 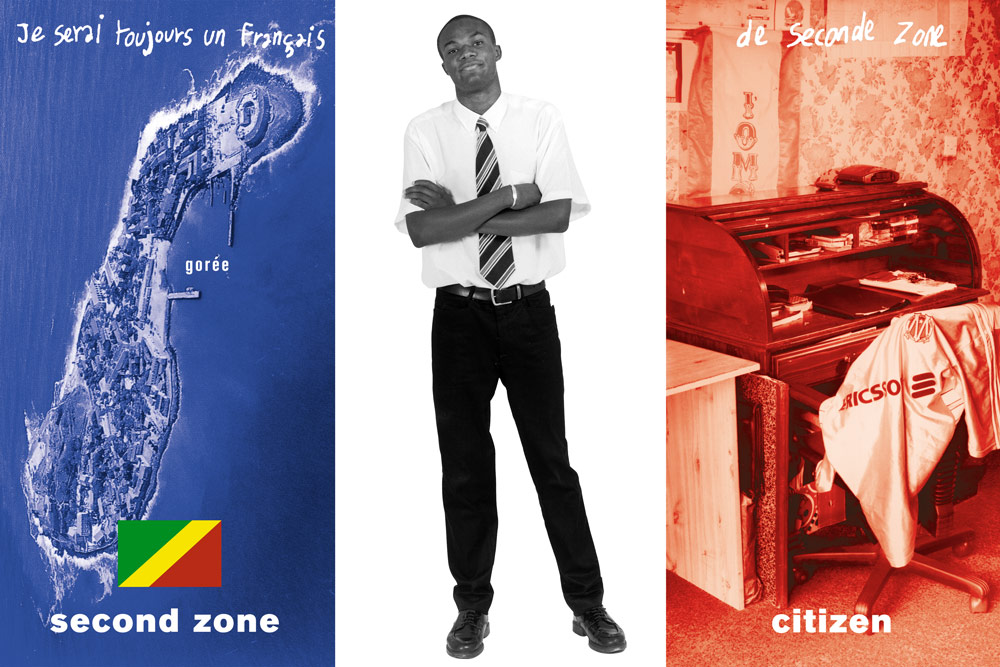 It’s a good question, in fact, to ask why I chose these photos for this flag. The first show Gorée Island, a famous center for the slave trade. I’ll nerver forget the moment I crossed the threshold of the door of no return. Hundreds of chained slaves had crossed it before me, never to see the African coast again. In my eyes, this page of history is crucial, it must never be forgotten. The second photo was taken in my room. It shows my desk. It’s one of the places where I spend most of my time. The main reason I came to France is for school. More then anything, I’m here to acquire knowledge that isn’t available to me in Africa. And I hope in this way to contribute, even minimally, to the development of the continent. As for the phrase I used : “Second zone citizen”. I have an enormous appreciation for France. I think I’m well integrated here, but I do feel a measure of discrimination. It’s part of everyday life. Some doors close more easily to foreigners or foreign-born French people, especially if they can be immediately identified by their names or their skin color. In my opinion, for a foreign-born French national, having French papers doesn’t automatically give you the same rights as the others. There’s the law, but can it really be present in everyday life ? 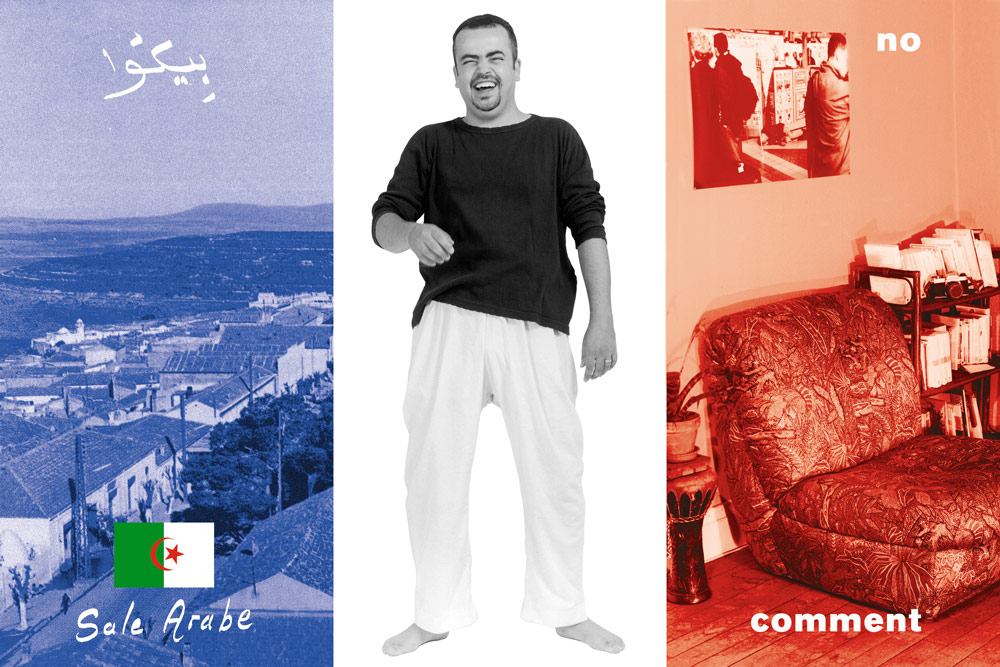 Now that I’ve completely rid myself of love for a country, now that I’ve mourned my land, here I am with my face on a flag. It’s not for love of another, however the one I discovered in 1993. Itwas, so to speak, a forced discovery, I was like Christopher Columbus hitting upon a coast. He thought he had found India. I believed I’d found shelter, shelter from the looks, the injustices, the unhappiness. Saved from death. Saved from everything, yes, but in contact with what ?

First, there’s art. A world in which you can live well on illusion. I hide in Rubens’ drapes, I take a seat at Caravaggio’s table, I insinuate myself into a Georges de La Tour, and give myself the pleasure of an encounter between a bicycle wheel and a stool. I’m at ease in illusion, at home there.

Then there’s him, asleep in a station. I know nothing else about this man I photographed one day while waiting for a train in the station of Saint Etienne. Though he was lying in the middle of the station that day, no one seemed to see him. He was lost in the invisiblity of the everyday. He was a non-seen, an abandoned piece of what’s visible. […] For a moment, it wasn’t him I saw, but myself. I took my own photograph.

And there’s the “dirty Arab”. That’s my second name, given by people whose names I don’t know. Those who nobody introduces, nobody understands, nobody gets. These people enjoy giving nicknames to everybody, to Blacks, Arabs, Jews, but they forget to introduce themselves, because they don’t have names or first names, they like being called “Whites”. They’re weird. Nevertheless, we’ve given them first names in order to identify them, and for fear of confusing them on one side with all the other whites, and on the other side with Malevitch’s “White Square on White Background”- which would be horrendous- so we’ve named them : racism, fascists, neo-nazis, etc.

And Franda. My town, my only land, if one day I start claiming one. It seems that the word Frenda is written “a frenda” and means “they hide themselves here”. Who? Why did hide? I have no answer. The only historical certainty is that this was the town of Ibn Khaldoun and Jacques Berque, but also simply, the town of may infatuations, my childhood, my initiation. Yet this town doesn’t belong to me, like it dosesn’t belong to Jacques Berque or Ibn Khaldoun. Besides, no land belongs to us , even if each of us belong to a land that choses us. 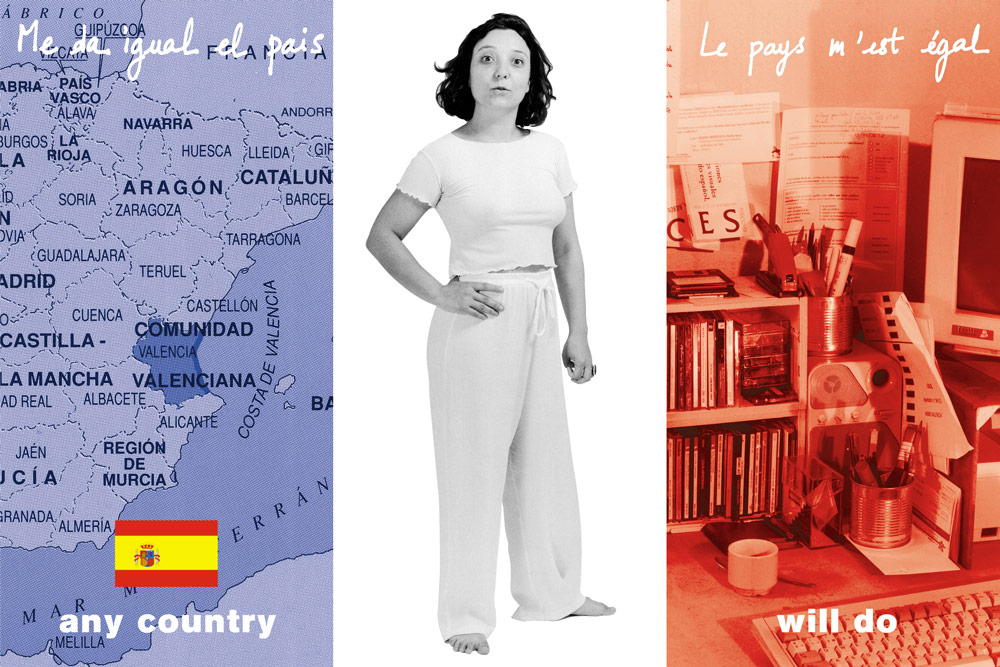 Words are perhaps the most important markers of identity. I feel more at one with them than with the image or the flag, above and beyond the close relation I could have with these two images. One is my mirrored image, the other is what is attributed to me through convention, through my connection to a geopolitically and socially determined space. Both are equally artifial in my eyes and make me think of another, of someone else.

Especially the fact of having this conventional backdrop, the Spanish flag, makes my mirrored photographic image a common one. In this last image I retain only the look, one I’ve seen in some photos of me from childhood up to adulthood. A childlike look I perhaps never lost or a spirited look I always had. It’s a very special look for me because it’s transparent like a veil, it projects images from the past and those to come. The body, passed down through generations, that correponds to an image of work. Working the arid, almost sterile earth. A body prepared for harshness, but thanks to my ancestors’ decisions, one who knew better times. 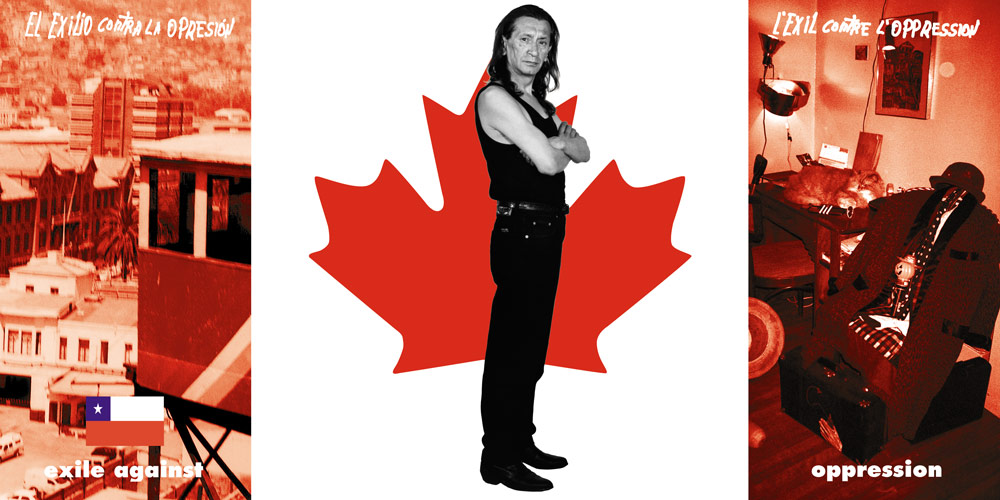 The first picture is of my work place, the other represents “exile against oppression”, which was present in the Chilean national anthem before the dictatorship of Pinochet, who took it out. Freedom has returned today, and this part has been reintegrated into the song. 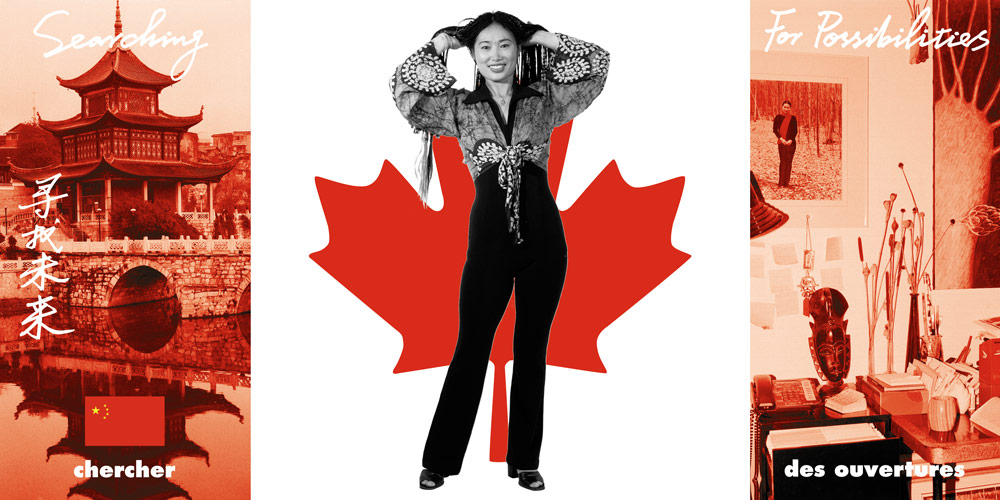 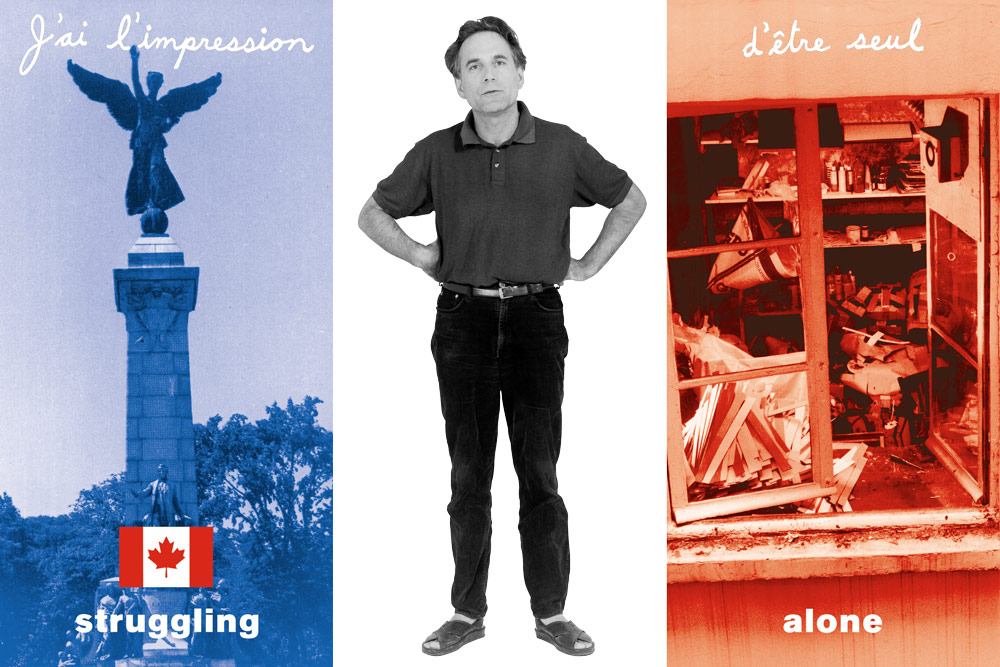 Does chance have a logic? I left Canada for France in January 1993. By a strange irony of fate, plane ticket was misprinted and the date given for the return flight was January 2001. Since then I’ve returned twice to Canada, once for tax reasons, and once to bury my father.

For me, human values are more important that notions of territory or nation. Frontiers exist no doubt to be transgressed and to help us along in life. I never felt I belonged to a group, a territory, a nation. So I never considered myself a migrant either I’m a spiritual nomad.

You have to leave and travel, to orient yourself alone. Exile has been a self-revelation. Living abroad is like viewing your lives in a movie. Each day I learn my life. I left loved ones behind. I suck all the nectar out of the present and this duality is my creative force.

One fine day, I’ll be one. I’ll reconcile what’s far with what’s close, the ideal with the daily, the past with the present, and the future will be perfect. 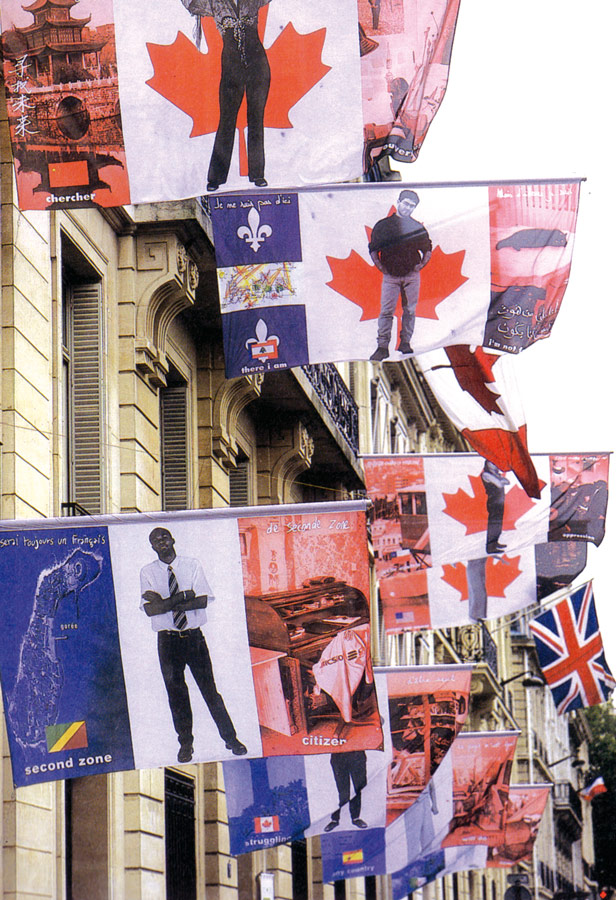